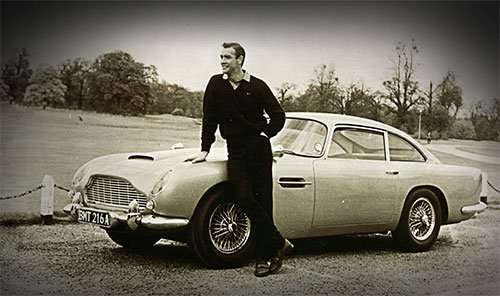 Founded in 1913 by Robert Bamford and Lionel Martin as ‘Bamford & Martin Ltd.’

1914 saw the birth of the name ‘Aston Martin’ following one of Lionel Martin’s successful runs at the Aston Hill Climb in Buckinghamshire, England.

Financial problems plagued the company over the next decade with the business forced to close in 1925 only to be rescued by a group of investors in 1926, forming ‘Aston Martin Motors Ltd.’

One year later, the AM monogram was replaced with the iconic Aston Martin wings.

1947 saw the dawn of the ‘David Brown era’ as the business was acquired by the English industrialist.

Frequently acclaimed as the most beautiful car in the world, the Aston Martin DB5 entered production in 1963.

The following year saw the birth of a relationship that has left an indelible mark on popular culture, as the DB5 was chosen to be James Bond’s car of choice in the classic film ‘Goldfinger.’

Despite the development of an iconic product range, the 1970s saw a change in ownership for Aston Martin as ‘Company Developments Ltd’ took over the firm in 1972.

After two more ownership changes, the iconic ‘DB’ moniker was resurrected in 1993 with the introduction of the DB7 at a new production facility at Wykham Mill, Bloxham. The same year saw Ford Motor Company increase their holding to take full control of the business.

The company was presented with the Queen’s Award for Export in 1998, recognising the contribution of the firm to the UK economy.

Photo via Car and Driver