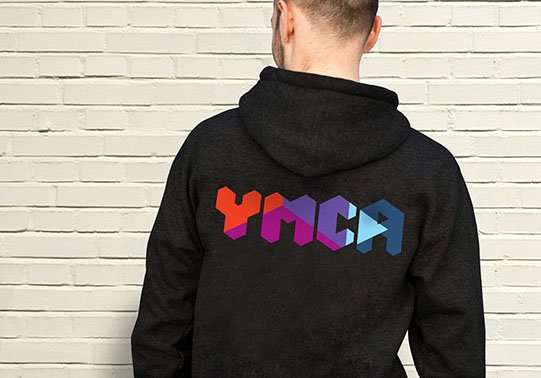 No longer catering exclusively to the young, male, or Christian, the YMCA unsurprisingly faced problems in communicating what it stood for.ArthurSteenHorneAdamson has developed a new brand identity which aims to better reflect the breadth of the charity’s work in England – we spoke to ASHA’s Marksteen Adamson about the project…

Founded 170 years ago, YMCA is one of the UK’s oldest and best-known charities. Lately, however, it’s been going through a bit of an identity crisis.

While still based on Christian values, the charity no longer caters exclusively to men, Christians or young people. It now has thousands of centres in 119 countries and helps over 50 million people but as its reach has increased, so too has a lack of awareness about what it does.

In 2010, the US YMCA aimed to address this by renaming itself The Y, launching a new logo and strapline which identified three key areas of work: youth development, healthy living and social responsibility.

The name was in part introduced to keep up with the times – apparently, most people using the service in the US referred to it as The Y – but also to address “public confusion” over its role and activities.

“We are simplifying how we describe the programs we offer so that it is immediately apparent that everything we do is designed to nurture the potential of children and teens, improve health and well-being and support our neighbours and the larger community,” the charity’s chief marketing officer told the BBC.

In the UK, the charity has been experiencing a similar problem. In an article announcing the rebrand, Alan Fraser, CEO of YMCA Birmingham and chair of the charity’s brand implementation group, said that while it ranked highly in terms of brand recognition, it was in the bottom 10 percent of UK charities in terms of awareness.

With YMCA centres now offering crèche and leisure facilities, training and education programmes and accommodation for all ages, its name no longer reflected the breadth of its work. As each of the 114 centres in the UK are run independently, there was also a lack of consistency in branding, communications and facilities.

To address this, the charity commissioned ArthurSteenHorneAdamson to reposition the YMCA and design an identity system to be used by all YMCA centres. The rebrand groups the charity’s work into five core areas: support and advice, accommodation, family work, health and wellbeing and training and education.

The original acronym has been retained but is accompanied by a less youth-focussed mission statement, which says the YMCA “enables people to develop their full potential in mind, body and spirit.”

The new visual identity includes a more modern geometric logo, a bold colour palette with a designated shade for each area of work and a triangular system applied to merchandise, literature and the charity’s website.

When working on the project, Marksteen Adamson, founding partner at ASHA, says the first task was to define “a core set of values” that underpinned the YMCA’s work.

“The YMCA does some fantastic work, but there was a lack of clarity around what it stood for,” he explains. “Although youth is very high on its agenda, it caters to all ages, and the idea of it being for just young people and Christians was no longer relevant. It was also struggling to categorise the hundreds of activities offered by different centres…and there was a lot of inconsistency in logos, signage and campaigns,” he says.

“The new mission statement references the YMCA’s Christian values but makes it clear that it’s not a church organisation – it’s there for the whole community and doesn’t discriminate.”

The new logo is drawn on a triangular grid, a nod to the triangle in the YMCA’s previous branding and Adamson says it was tested on both YMCA representatives and members of the public in Birmingham, Leeds, Manchester, London and Cheltenham.

“We created three different marques: one which was quite safe, another which was a little more dynamic, and a third (the logo now in use), which felt a lot more ‘future friendly’ in terms of how it could be applied to different things,” he explains.

“We then presented all of our ideas to people on the street, from teens to parents and kids, asking what people thought of them and eliminating the designs they didn’t like. If people in the street said they would buy a hoodie with it on, we felt that was a good measure of whether it was right,” he adds.

The new logo has a much more youth-orientated feel than the YMCA’s old marque, particularly when used on hoodies and signage, but for corporate presentations, ties and pin badges, it appears in a more sombre grey.

Triangular patterns are also used on stationery and communications, while singular triangles act as “a pointing device” on imagery promoting each of the five key areas of service:

When choosing colours for each core area, Adamson says it was important that they felt fresh, contemporary and appropriate for each service. “We didn’t feel pastel would be right for [the YMCA], or anything too bright, such as primary colours, which would feel too young. For health and wellbeing, for example, green was a natural choice, while a clean blue worked well for accommodation,” says Adamson.

So far, 34 YMCAs in England have signed up to the new brand. It’s also being rolled out across YMCA stores and the charity expects it will be adopted by more centres over the next few months. Adamson says the initial response has been “overwhelmingly positive,” adding: “everyone agrees it feels a lot more trendy and up to date – especially the people who live and work here.”

Commenting on the identity, Fraser says that “for the first time, YMCA will be communicating a clear message about what YMCA is and what it is we do, not just on a local level, but as a national federation.”

“Many people are worried about charities wasting their money on things as ephemeral as branding.  But it is clear that how we communicate to people has as big an impact, and perhaps an even bigger one, than the factual content of our message,” he explains.

Adamson says the rebrand is also designed to help the YMCA save money on designing communications: each centre’s website will run on the same WordPress theme and staff will be given downloadable templates for newsletters, leaflets and presentations. “It should be useful when creating joint pitches too, as centres often team up to secure funding,” he adds.

As well as raising awareness of the YMCA’s services in local communities, the new identity should help the charity launch more effective national campaigns. That jagged logo won’t appeal to everyone but the new system is a considerable improvement on the old branding, and makes a much clearer statement about what the YMCA does, who it helps and what it stands for.

“This will help people who might benefit from our services – or who might want to support our services – to understand us better and make an informed choice.  But it will also help us increase the strength of our voice when we lobby for change on behalf of young people,” says Fraser.